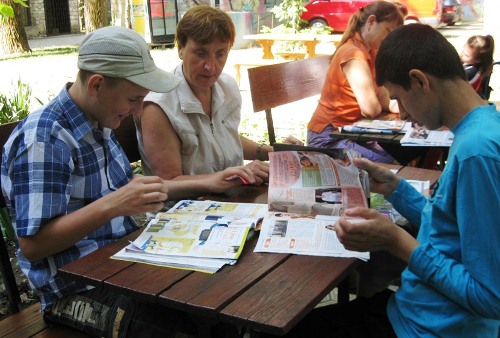 The Second Edition of Summer School for Mental Health

75 beneficiaries of Mental Health Centers SOMATO and DANKO, Balti, their parents, and social and medical assistants from the two Centers, participated at the second edition of the summer school for mental health, organized by the Association SOMATO. Summer school with the title “We know how to do everything together” was organized in the period June 27- July 1, at the recreation camp “Astoria” in Vadul lui Voda. “By organizing and conducting this school we plan to develop communication skills, cooperation and inter-relation between the beneficiaries of the two centers and their parents/relatives”, said Cornelia Iacubovschi, summer school coordinator.

During the four days of the summer school beneficiaries and their parents were involved in training and entertainment activities. “Let’s know our child”, “Invitation to the dialogue”, “Close to Children” – were some of the training modules for parents and relatives of the beneficiaries.

Eugen Taranu, father of the beneficiary Alexandru, says that he participated for the first time in such a school, which proved to be very useful. “Here parents learned to understand their children better”, mentioned Eugen Taranu.

On the other hand, mother of the beneficiary Ilie, Raisa Crapivnitcaia, mentioned that Summer school was an effective tool of communication with other parents who are marked by a common problem. “Here we could devote more time to our children, because at home, busy with everyday problems, we do not manage to do it”, said Raisa Krapivnitcaia.

Oleg, one of the beneficiaries of the Center SOMATO, said that he liked “camp, forest and fresh air at the Dniester”.