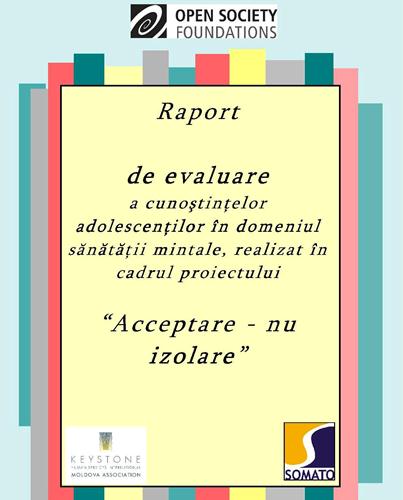 About 300 pupils from six educational institutions from municipality Balti, districts Sangerei and Falesti became the object of the study carried out by Association SOMATO within the project “Acceptance, not isolation!”, supported by “Keystone Human Services International”.
The study, which aimed to determine the level of awareness regarding mental health in pre - and post- information period, was conducted in March-April -May- June 2013.
It was determined that in pre-information period 35% of adolescents knew what is mental health; 5% could not define the concept, and about 60% confused mental health with mental illness. About 35% of adolescents associated the concept of mental health with such terms as reason/intelligence; 9,23% with depression/stress/neurosis; 43,63% gave different answers, beginning with “mentally normal person” and ending up with “moron”. In defining notions, adolescents demonstrated reduced level of information.

A series of informational materials on mental health were edited during the project, they were distributed in the six schools. Also, pupils were demonstrated a documentary movie “Let’s learn to hope together”, made by Association SOMATO. There were conducted workshops dedicated to mental health.