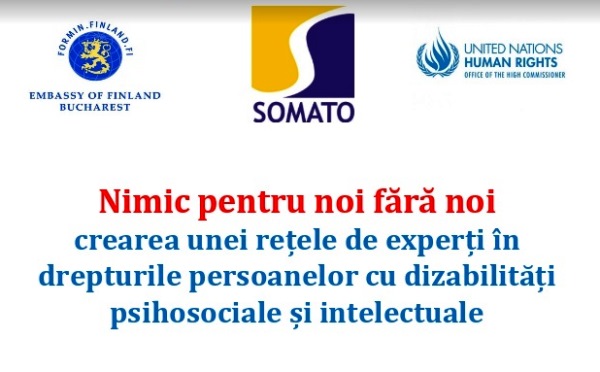 SOMATO Association, an organization active in the field of mental health for over 18 years, will create a network of experts on the rights of people with psychosocial and intellectual disabilities.

For this purpose, the SOMATO Association will carry out a project, funded by the Embassy of Finland in Bucharest. The project was launched on 1 July this year and is due to be completed on 1 May 2018.

Project manager, Andrei Esanu, says that during the ten months of the project will be organized conferences, training activities and promotion of the Convention on the Rights of Persons with Disabilities, advocacy activities at the level of central authorities. Promotional and training materials for project beneficiaries will be developed and published.

"The direct beneficiaries of the project will be 12 users of four pilot services trained as experts, who will form the network itself, and 240 people with psychosocial and intellectual disabilities from different mental health community services to be involved in the information sessions" , Says Andrei Esanu.

The concept of "peer" support will be promoted within the project and the training activities, an emphasis will be placed on the formation of communication skills. Another priority activity in the project will be advocacy and political dialogue with representatives of central and local authorities.

The project partners of the SOMATO Association are Ministry of Labor, Social Protection and Family; Office of the High Commissioner for Human Rights; IP "Trimbos Moldova"; Community Mental Health Centers in Soroca, Orhei, Cimislia and Cahul.

Previous media →
Informal dialogue: "I am important! My rights matters! "